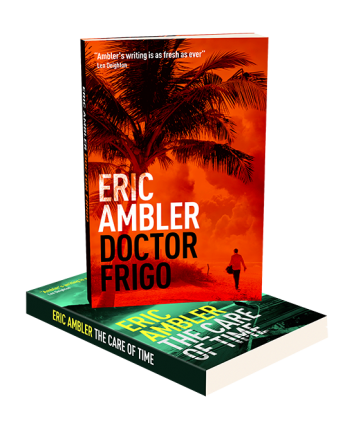 1925 – Scholarship to study engineering at Northampton Polytechnic in Islington – soon dropped out.

Trainee at Edison Swan Electrical Company and then their cable works in Gloucestershire.

Return to London, he composed a press release extolling the virtues of a batch of dodgy bulbs for car headlights.

1936 –The Dark Frontier – Debut novel published. Ambler later remembered 1936 as “the year in which Italy invaded Abyssinia, civil war broke out in Spain and Hitler ordered the German army to reoccupy the Rhineland… These were the things I was trying, in my own fictional terms, to write about.”

1953 – Academy Award for his script The Cruel Sea

1956 – The Night-Comers, also published as State of Siege

1964 – Edgar Award for The Light of Day/Topkapi, Best Novel

1969 – The Intercom Conspiracy, also published as The Quiet Conspiracy

1972 – Gold Dagger Award for The Levanter

1991 – Waiting for Orders – eight stories mostly written in 1939-40 while Ambler awaited his call to military duty.